This year significant progress was made controlling five noxious weeds in the Metolius Basin. Friends thanks the Summer Home owners along the river and all the private land owners that have supported and cooperated in this effort.

1. Knapweeds – The Camp Sherman Weed Warriors report that populations of both spotted and diffuse knapweed are much reduced along major roads, on some Forest Service sites and on private lands. This small band of locals has been pulling these plants for 17 years now and their persistence is paying off.

2. Scotch broom – Fortunately this troublesome plant is found on only a few sites in the Basin and while not eliminated they are now controlled.

3. Yellow Flag Iris – This attractive streamside plant is found in the Lake Creek system and along the upper Metolius from below the Tract C bridge down to Gorge Camp Ground. Friends initiated herbicide control in the Lake Creek system in 2008 followed by many re-treatments. A few plants persist but the population along the North and South forks has been reduced by 95%. In 2015 the Forest Service sprayed Yellow Flag in the Gorge CG area. In 2016 that reach was re-treated, along with the reach from Allingham Bridge down to Pine Rest. This year the Forest Service with Oregon Department of Agriculture help sprayed most populations from the Tract C bridge down to the Camp Sherman bridge, plus re-treatment of all previous areas. Friends assisted the FS in this project.

4. Ribbon Grass – This varigated green and white plant is found along the Metolius from below the Tract C bridge downstream to Candle Creek CG. It is plentiful from just above the Camp Sherman bridge down to Gorge CG and then on scattered sites downstream to Candle Creek and maybe beyond. The lower river has not been surveyed. As with yellow flag iris, ribbon grass was treated as described above.

5. Reed Canary Grass – This is the parent plant of ornamental ribbon grass. One site by Tract C bridge was found and treated in 2017, however populations have been discovered along the Lake Creek system. Friends will survey Lake Creek in 2018 and devise a control plan. 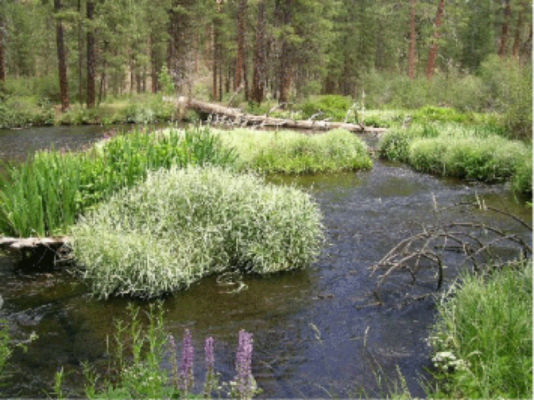 Ribbon grass: this is what we’re battling

Summary – While meaningful control has been deliberate but slow along the upper Metolius, real progress was made this year, and next year FoM will collaborate with the FS and ODA on an aggressive control effort from Tract C bridge down to Gorge CG. There is still a lot of work to do but we are now well on our way in controlling noxious weeds and witnessing the return of our native plants via passive restoration. For more information contact Pete Schay [email protected] or 541-595-2118.